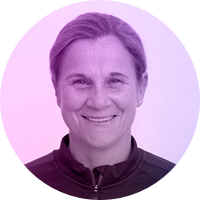 Jill Ellis
All-Time Winningest Coach in U.S. Soccer History; Former Head Coach
Jill Ellis was named Head Coach of the U.S. Women’s National Team in 2014. Since then, she has won two Women's World Cups, in 2015 and 2019. The victory in 2019 shattered records, making her the first coach to win the Women's World Cup twice. The only other coach to have won two World Cup titles is Vittorio Pozzo, winning for Italy in 1934 and 1938.